Vermeer at the National Gallery of Art, Washington, DC

A while ago, I decided to drive to Washington and personally see the 4 Vermeer paintings hosted by the National Art Gallery 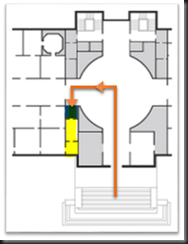 in Washington, DC. It turn out to be a long 11 hours drive from Toronto, but it was definitely worthwhile.
One thing that immediately impact anyone visiting the NGA’s Vermeer exhibit is the small area dedicated to it. You would think that these masterpieces would deserve a bright open space for prominence sake. Instead, see the map at right; the four of them are in a very small, not so well illuminated room, the very first at left from the rotunda at the very entrance. Here is a link to the room map and its contents
The NGA was careful enough that placed the small paintings in a small room that in my humble opinion resembles a schilderijkabinet which is Dutch for ‘painting cabinet’. These were rooms dedicated to the display of paintings during the XVII century in the Dutch Republic and Flemish provinces. The normal small paintings in display were called kabinetstukken or ‘cabinet pieces’. 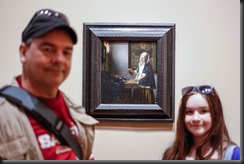 I took a couple of photos that included my favourite model (my daughter) next to the paintings, not because I wanted to show off (ok, maybe a little); but to provide a point of reference for the painting size, which is obviously small. 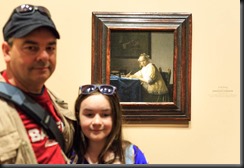 The next two small rooms in marked in yellow also have some other kabinetstukkens but of different themes, still lifes, portraits and landscapes. The first has many small still life including one of Ambrosious Bosschaert the Elder (who was the father of this style), his brother in-law Balthasar Van der Ast and a remarkable trompe l’oeil.
The NGA is one of the best museums I have ever visited, I guess because my interest in classic paintings. I would place it amongst the top in the world, certainly in North America. Their collections is outstanding and include works by Raphael, Rembrandt, Frans Hals, Van Dyck, Rubens, Titian, Botticelli, Canaletto, el Greco, Goya, Velazquez, Murillo, etc., etc.
So, no regrets about driving down for 11 hours and another 12 driving back. It was worth every minute of it.
Feel free connect with me in Facebook or Twitter

Posts Categories. Click to see posts from a category

Vermeer Renaissance Through Photography. The Book

Vermeer Renassaince Through Photography by Levin Rodriguez | Make Your Own Book